The Furniture Industry Research Association has today (8 January) published its annual ‘Statistics Digest for the UK Furniture Industry’. Acting as a barometer for the furniture industry, the Digest highlights continued growth in demand for furniture and furnishings. Whilst some of this growth has been fed by rising imports, UK manufacturers have also benefited, with 2016 being the latest in five successive years of incremental growth. 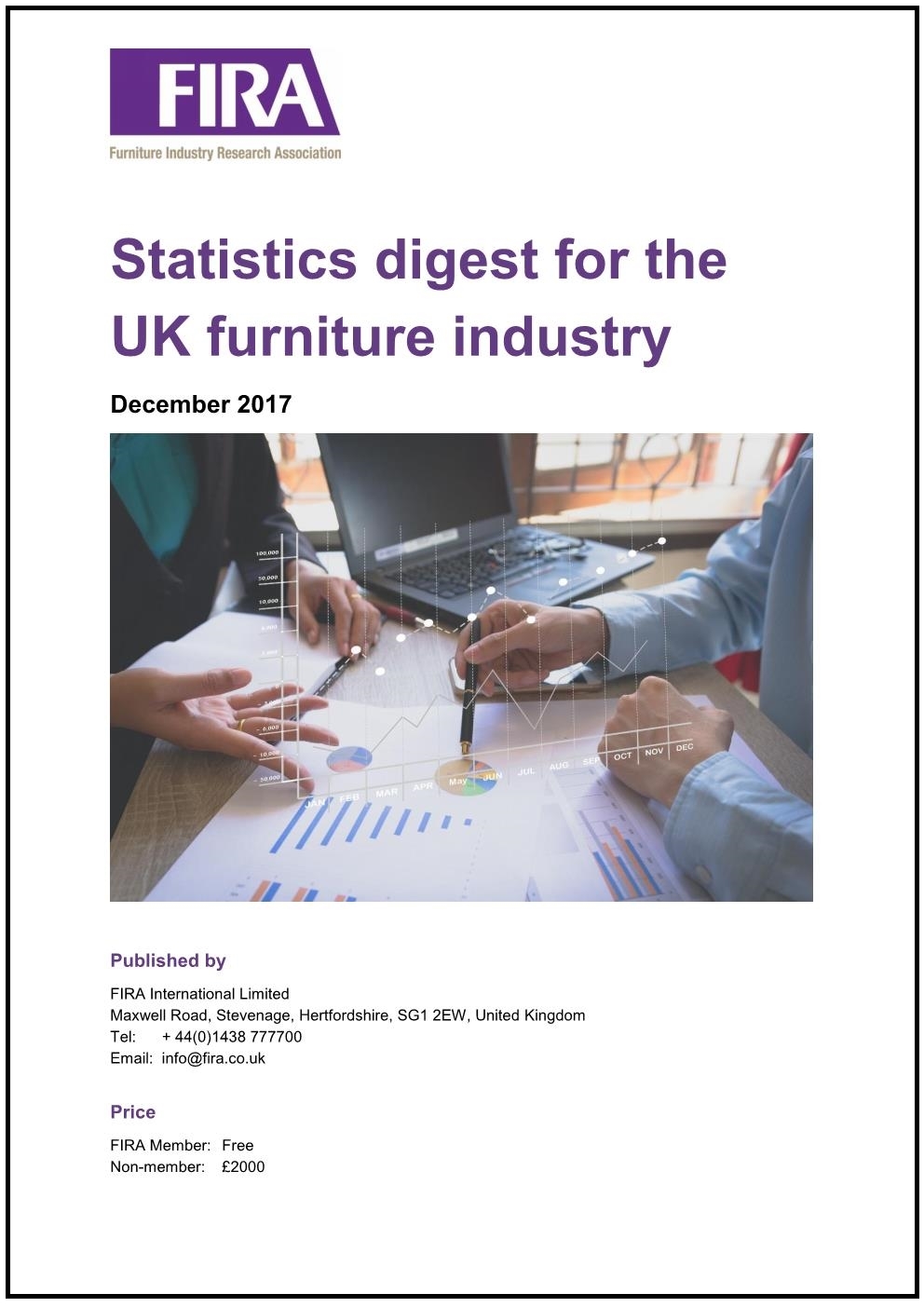 The 56 page Digest comprises detailed time series analyses of UK furniture manufacturing, furniture and furnishings retail and international trade. It also includes statistics on consumer behaviour such as spend, lending and house buying. Analyses are based on latest available data sourced from Government bodies including the Office for National Statistics (ONS), HM Revenue and Customs (HMRC), Communities and Local Government, and the Bank of England.

One of the main headlines within the report is consumer demand for furniture and furnishings continuing to grow. Whilst some of this growth has been fed by rising imports, UK manufacturers have also benefited, with 2016 being the latest in five successive years of incremental growth.

Speaking on this trend, Dr Pete Beele from the Furniture Industry Research Association and author of the Digest said “the full retail picture for 2017 has yet to emerge, but preliminary signs are good, despite some press speculation to the contrary. We saw sales continuing to rise in 2017 with first and second quarter consumer expenditures being between 5-6% higher than for the equivalent periods in 2016”.

UK furniture manufacturers have continued to perform well over recent years with 2016 turnover reaching £8.4 billion; 4.5% higher than the previous year. Furniture warranted special mention in the latest statistics office manufacturing bulletin, highlighting that the recent percentage increase in sales was the third largest in the UK (behind motor vehicles and pharmaceuticals) and was driven by sales of wooden kitchen furniture and upholstered wooden framed seats such as three-piece suites.

Putting this growth in context, in 2013 furniture manufacturing equated to 1.35% of the UK’s total manufacturing turnover, whereas by 2016 it was estimated to have increased to 1.60%.

Latest employment figures reinforce the importance of the industry to the UK economy with furniture manufacturing’s 88,000 employees representing almost 3.5% the country’s manufacturing workforce. It is estimated that the furniture and furnishings sector as a whole, including manufacturing, design, specialist retail, trade and repair comprises 50,000 registered companies supporting 327,000 jobs.

Speaking on international trade, Dr Beele commented that “imports were on the rise, with the provisional figure for 2016 being £5.8 billion. However, based on extrapolations of import data published up to September 2017, I expect that the total for 2017 could increase to about £6.5 billion once the full year’s figures are confirmed”.

Imports are not the full story as export performance has also improved, perhaps due to the influence of a weaker pound and an industry more comfortable with trading abroad. Exports reached £1.13 billion in 2016, reflecting a year on year increase of 13%. A further 9% growth is expected when 2017 figures are published.

With Brexit on the horizon there is an inevitable focus on the UK’s trading relationships with the European Union. Despite 63% of all exports being sent to the EU it accounts for a considerably greater value of imports, resulting in a negative trade gap of £2.20 billion.

The largest single country negative trade gap continues to be with China. This increased to £1.86 billion (from £1.75 billion in 2015). Next on the list were the negative trade gaps with Poland, Italy and Germany, which equated to £0.58 billion, £0.56 billion and £0.50 billion respectively.

In closing, Dr Beele added that “understanding UK markets and international trade are critical to strategic and business planning and the Statistics Digest not only relieves much of the analytical pain but also, due to its comprehensive referencing, signposts routes for more detailed information”.

The Digest is available free of charge to Research Association members, who once logged in can download the Digest below. if you don't have a member login please contact us.

Non-members can purchase a copy, priced at £2,000+VAT, by contacting info@fira.co.uk or clicking here.

More about becoming a Member